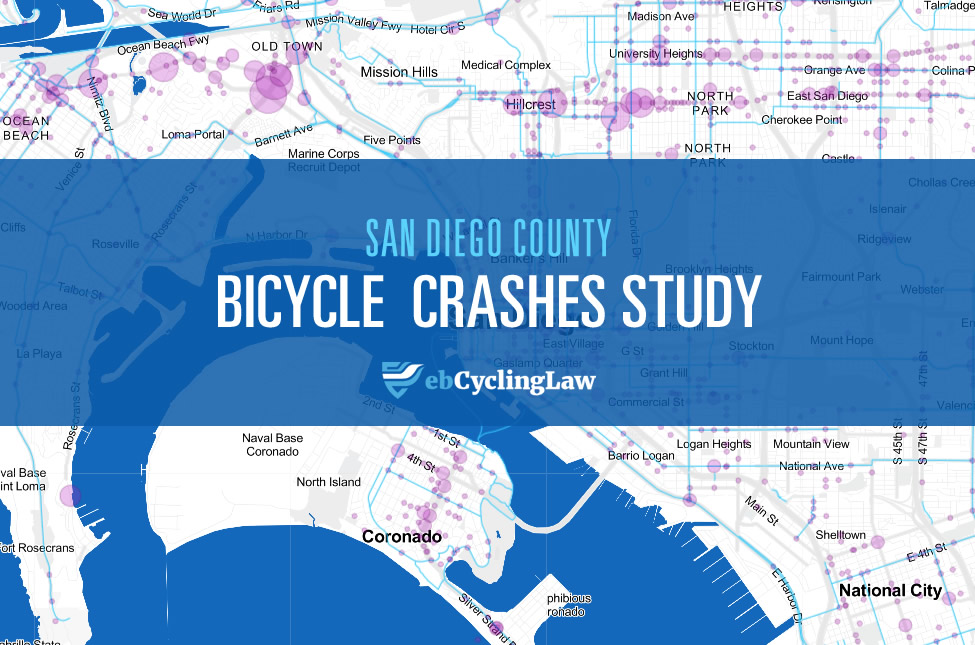 Numbers like these highlight the fact that cyclists are among the most vulnerable users of our roads. They can be difficult for drivers to see and are afforded very little protection when struck by motor vehicles. To keep cyclists safe, it is important to first know where they are at the highest risk of being struck and injured.

What part of San Diego’s road network are the most dangerous? EB Cycling Law examined seven years of San Diego county bicycle crash data to find out. With the help of data visualization agency 1Point21 Interactive, we identified the following:

The 50 Most Dangerous Intersections for San Diego Cyclists

Midway Drive & Rosecrans Street: The Most Dangerous Place for Cyclists

This map displays all bike collisions recorded in San Diego County from 2010 – 2016. Larger circle sizes indicate more crashes at that location. Areas with high concentrations of bicycle related crashes are outlined in pink.

*Click and drag to move the map. Zoom in and out with mouse wheel or the buttons at the bottom left.

At the city level, San Diego had far and away the most bicycle collisions, with 3,514.  Due to the significant higher crash volume when compared with other cities in the county, the city of San Diego also had the most fatal (27), severe injury (196), visible injury (2,231) and complaint of pain (1050) crashes.

*There were an additional 515 crashes in unincorporated areas of San Diego county.

High Crash Zones: 15 Locations to be Aware of

After identifying the most dangerous intersections, we found that there were several larger areas where high volumes of bike collisions occurred. These zones (which we have named in the table below for ease of identification purposes) are most often found in busy urban areas, such as downtown San Diego and Pacific Beach. These zones are highlighted in pink on the interactive map.

Takeaways: How Can We Make San Diego’s Roads Safer For Cyclists?

We see more drivers distracted today due to cell phones. We are also seeing more bicyclists on the road utilizing dockless bikes. Therefore, unless more protected bike lanes are utilized in these dangerous intersections and high crash zones, we will continue to see bicycle crashes and injuries in these locations. Class 4 bikeways are recommended for the dangerous intersections and high crash zone areas. A class IV bikeway is a right-of-way designated exclusively for bicycle travel adjacent to a roadway which are separated from vehicular traffic. Types of separation include, but are not limited to, grade separation, flexible posts, inflexible physical barriers, or on-street parking.

An Example of a Protected Bike Lane in Seattle, WA.

The Federal Highway Administration Bicycle and Pedestrian program evaluated this issue and concluded that separated bike lanes can:

The Next Steps for Our Study

This study analyzed all crashes in San Diego County.  Our next step is to isolate crashes that occur where bike lanes are present. This will allow us to identify areas that need bicycle infrastructure or that already have bike lanes but may need improvements.

This study uses bicycle collision data from the California Highway Patrol for the years 2010-2016. Unfortunately, many records did not include accident coordinates.  For those records, crash location data was generated using the primary and secondary road listed for each record. Kernel density estimation was used to create the danger zone polygons.

Both intersections and zones were ranked according to the Cyclist Risk Score (CRS).  This composite score takes crash volume and bicyclist injury severity (minor injury, visible injury, severe injury and fatality). The injury severity is noted when the crash is reported to the CHP, therefore there is no more information available about each specific injury.

To protect you from Coronavirus, we are now offering a quick easy REMOTE intake process. Get our team of attorneys working on your case immediately without risk.

Please confirm deletion. There is no undo!